See below the description of the 3 volumes

Mihail Marin`s reputation as a chess author is unsurpassed. In this book he reveals his own white repertoire with 1.c4, the English Opening. Volume One covers 1.c4 e5, and Volume Two will complete the repertoire by covering all Black`s other replies to 1.c4. The theory is state-of-the-art with many novelties suggested, but most useful of all are Marin`s lucid explanations of how to play the resulting positions.

A repertoire for White with 1.c4 e5
A repertoire that has been tested against grandmasters
Written by an award-winning author

Foreword by the author

I have always regarded building up a perfect opening repertoire, suitable for one`s style and skills, as no easier a task than the Argonauts` search for the Golden Fleece.

There is a whole series of aspects to be clarified before even starting thinking about picking specific openings. Should we approach the opening in the same way irrespective of colour, or would it be wiser to display our main ambitions with White, while playing in a more restrained style with the black pieces? At all levels, we will find adherents of both these methods.

There are also several ways to give the repertoire a coherent character. We may be guided by the same general principles in all our opening variations (such as fighting for space and the initiative, or, on the contrary, aiming for solid but somewhat passive positions). This is the widest approach, which can lead to the coexistence of systems that bear absolutely no optical similarity to each other. It has frequently been the choice of the greatest players in history, but it is not easy to handle for mere mortals.

Many prefer to develop and exchange their pawns and pieces according to the same general patterns, irrespective of the opponents play. In order to achieve this with Black, they utilize tandems of related openings such as the Slav and the Caro-Kann, or the King`s Indian and the Breyer Ruy Lopez. This is likely to lead to a high degree of specialization in the respective systems, but risks limiting one`s chess horizon.

When building up my repertoire with White, I treasure space and the initiative, but also the possibility of keeping play within a relatively limited range of structures, which I tend to study in depth. I also make major changes in my repertoire every five, ten or fifteen years, to avoid the risk mentioned in the previous paragraph.

As a child and teenager I only played 1.e4, but at the age of 18 I switched to 1.d4. For several years I employed aggressive set-ups, but in the early `90s I started to be attracted to the schemes involving a kingside fianchetto. Without me being aware of it, this was the moment when the book you are holding in your hands started its unusually long period of gestation.

The Catalan and the Fianchetto variations against the King`s Indian and Griinfeld yielded me many wins, but I failed to find adequate related schemes against the Slav. Experience taught me that 1.d4 d5 2.Nf3 Nf6 3.g3 c6 followed by ...Bc8-f5 or ...Bc8-g4 offers White nothing but trouble. I was amused to find out that, a long time ago, a certain Valentin Marin (!) managed to hold his own by employing this set-up with Black against the great Saviely Tartakower. It is also ironical that, together with other games played by Tartakower at Barcelona in 1929, that game convinced theoreticians to baptize the system based on 1.d4 and 2.g3 ``The Catalan Opening``.

In order to avoid the aforementioned problems, I started employing 1.Nf3 followed by 2.g3 and 3.Bg2 as my main move order, delaying the direct fight for the centre. After a few years I understood that this works well if Black develops in the spirit of the Indian Defences, but does not offer chances for an advantage if Black occupies the centre with 1...d5 (or 1...Nf6 and 2...d5).

After having had enough of 1.Nf3, I decided that the d5-square should immediately be taken under observation with 1.c4. Thus was initiated the most consistent period of success with White in my whole career. Against most of Black`s answers I would generally develop according to my own taste, with g2-g3, Bf1-g2, etc. If allowed, I did not hesitate to transpose to the Catalan or the Fianchetto King`s Indian and Grünfeld, by playing d2-d4 at the right moment. The Slav Opening remained somewhat aside from this point of view, but I usually answered 1...c6 with 2.e4, transposing to the aggressive Panov Attack.

When I first considered writing a book dedicated to a pure English Opening repertoire, I was afraid that I would face insurmountable problems proving an advantage for White in every line while avoiding recommending a transposition to 1.d4 at various points. This over-ambitious quest, which I had secretly been dreaming of, was against the long-established views of official theory and looked nearly impossible to accomplish.

After more than one year of deep analysis with Valentin Stoica, I managed to make a step I had never dared to try before, by building a viable repertoire based on 1.c4 followed by 2.g3 irrespective of Black`s answer!

That White refrains from an early d2-d4 in all these lines does not mean that he gives up the fight for the centre. Once White has eliminated the danger of Black`s counterplay, or achieved some other sort of advantage, White will strive to occupy the centre. You will find the spirit of this general strategy throughout this book and its companion volume.

I completed the initial analytical work shortly before participating in the 51st edition of the Reggio Emilia tournament, as 2008 turned into 2009, and felt ready to give the brand new repertoire a thorough practical testing. The result was more than encouraging: with White I scored 4 out of 5, the equivalent of a rating performance of over 2800. Moreover, I had the better position in the only game I lost.

I cannot anticipate how my understanding of chess will change in, say, ten years, but for the moment I feel confident that, after almost 20 years of research, I have finally found my Golden Fleece.

By writing this book, I wish to share my conquest with you, dear reader.

Mihail Marin reveals his own white repertoire with 1.c4, the English Opening. In Volume Two, Marin covers all Black`s replies to 1.c4 except 1...e5 and 1...c5. The theory is state-of-the-art with many novelties suggested, but most useful of all are Marin’s lucid explanations of how to play the resulting positions.

Mihail Marin completes his opening repertoire for White with 1.c4, the English Opening, by covering 1.c4 c5. The theory is state-of-the-art with many novelties suggested, but most useful of all are Marin’s lucid explanations of how to play the resulting positions.

Mihail Marin is a grandmaster from Romania. His previous books for Quality Chess have established him as one of the world`s best chess uthors. Marin`s recent tournament successes, using this repertoire, increased his rating to a personal best of 2616. 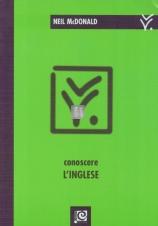 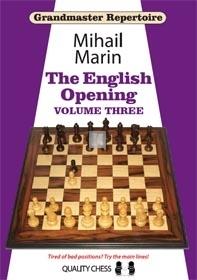 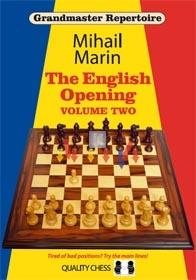 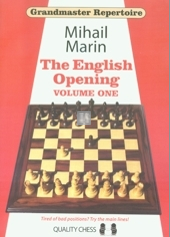