Harry Benson’s rare, exclusive photos of the elusive and controversial chess genius Bobby Fischer taken during the historic World Chess Championship match in Iceland in 1972 are collected here for the first time, in Bobby Fischer.

Benson met Fischer in Argentina, during the qualifiers for the match, and followed him through his training and conditioning in New York, during the many weeks of the match, and was there in the winning moment to document Fischer’s historic victory.

Fischer was a known recluse, and Benson was one of the very few people he would talk to throughout these defining moments in his life.

The match, known at the time as the “Match of the Century,” is now generally considered a battle in the Cold War between the U.S. and the U.S.S.R. Benson’s intimate access to Fischer was not the easiest of tasks to accomplish.

Worried about spies and saboteurs, lacking substantial support from the U.S., and seeking deep mental focus, Fischer prized solitude. In fact, Fischer barred the door even when his mother arrived from America.

The intimacy of these photographs is testament to Benson’s photojournalistic prowess. Filled with idiosyncrasies and a complete loner, Fischer is still revered by chess fans around the world and is considered the greatest chess player of all time.

Benson’s photos of Fischer give insight into the private world of the man Benson calls “the most complicated and most fascinating person I have ever photographed.” Bobby Fischer is an in-depth look at the champion unlike any the world has ever seen.

Scottish born photojournalist Harry Benson was the most published photographer in LIFE magazine before it closed and continues to photograph for many major magazines.

In 2009, Queen Elizabeth named Benson a Commander of the Order of the British Empire (CBE). Benson has had 40 one-man exhibitions of his work in the U.S. and Europe and is the author of 14 books.

Benson lives in New York and Florida with his wife, Gigi, who works with him on his exhibitions and books. Their two daughters live and work in Los Angeles. 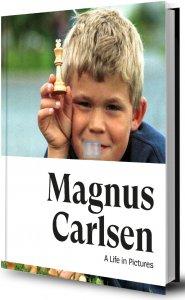 Magnus Carlsen: A Life in Pictur...