The Classical Era of Modern Chess

A hundred and one years after H.J.R. Murray's A History of Chess comes McFarland's premier offering of chess history, a magisterial work of decades of labor (and two-and-a-half years in editing).

A hundred and one years after H.J.R. Murray's A History of Chess comes McFarland's premier offering of chess history, a magisterial work of decades of labor (and two-and-a-half years in editing).

Introduced by Arabs to their new territories in the Mediterranean during the 8th and 9th centuries, the game of chess soon spread throughout Europe, slowly evolving from the less dynamic shatranj version into modern chess.

This study examines the classical era of what became modern chess from the late 15th century into the 1640s.

After tracing the birth of modern chess in Europe, it offers a critical appreciation of all chess literature - including works by von der Lasa, van der Linde, Murray, Chicco, Eales, Petzold, Sanvito, Garzón and many others.

The book also chronicles all the openings and all game moves and all the problems of the era and the development of the laws and rules like the "en passant" capture (much debate!) and castling.

With a glossary and 155 illustrations, this is the definitive overview of a transformative era in the history of chess.

Here, for the first time, ALL books and manuscripts on chess from the early 15th until the first half of the 17th century have been meticulously described and thoroughly researched. The views and opinions of All important chess historians, from the early 19th century until today, have been carefully evaluated.

Peter J. Monte studied ancient history at Leiden University, which granted him a doctorate in 1977. He has written articles on the history of chess and lives in the Netherlands. 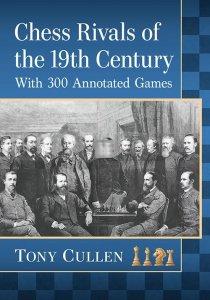 Chess Rivals of the 19th Century