The American Chess Magazine brings you 100 colourful pages, packed with amazing chess material, ranging from world class play to local and state news and games. Instructive and entertaining games from recent events are presented with outstanding annotations, while special attention is given to overviews of latest trends in the openings, and explanations of practical endgame techniques.

The American Chess Magazine brings you 100 colourful pages, packed with amazing chess material, ranging from world class play to local and state news and games. Instructive and entertaining games from recent events are presented with outstanding annotations, while special attention is given to overviews of latest trends in the openings, and explanations of practical endgame techniques.

During a 50-year chess teaching career, from the Fischer–Spassky match to Beth Harmon in Queen's Gambit, Pandolfini has dedicated his life to inviting the general public into the mysterious world of chess!

If there is one person who can be justly called America’s Chess Teacher – it is Bruce Pandolfini, who is currently celebrating 50 years of a chess teaching and writing career that started in the days of the Fischer boom and has lasted up to the present day! In an exclusive interview conducted by ACM Senior Editor Pete Tamburro, Pandolfini reveals how chess took over his life like a juggernaut and how he chose chess teaching as his profession – to the satisfaction of thousands, including current U.S. No.1 player Fabiano Caruana, who were able to benefit from his enthusiastic instruction. Besides having published over 30 chess books, and developing chess in schools in the New York area, Bruce’s passion for promoting chess also resulted in his participation in the making of the movie Searching for Bobby Fischer and also the Netflix hit series The Queen’s Gambit.

Coincidentally, the summer of 2022 marks another 50th anniversary – of the iconic World Championship match played in Reykjavik between Boris Spassky and Robert James Fischer. In a lively three-part article ACM Deputy Editor Jimmy Adams relates his own colorful recollections of the happenings, prior, during, and shortly after this legendary duel. This is followed by an excerpt from his own Fischer poem(!) and an interview with Liz Garbus, director of the documentary film Bobby Fischer against the World. Replete with little known niceties, Jimmy’s article highlights his personal viewpoint on this dramatic encounter as seen from the UK. To supplement his story, GM Mackenzie Molner has analyzed two key victories by Fischer from the match.

“Best Analysis” winner, GM John Burke has prepared a very detailed report on the Candidates Tournament in Madrid, including annotations of the most important games played, and explaining why the second place eventually proved to be as important as the first! This article also provides details on the biggest debate going on around the chess world from the early days of summer, assigned to the importance of the Madrid event and its consequences for the World Championship match scheduled for the end of this year.

The winner of the “Best Print Article by a Junior Award,” ACM Features Editor NM Grayson Rorrer then provides an extensive report on the U.S. Junior Championship – which ended with a swift victory for GM Christopher Yoo, whose outing in Saint Louis led to a truly top-notch performance. Aside from the winner’s impressive run, there were full-fledged battles everywhere, which Grayson has skillfully brought into the limelight.

Another perspective follows in an article by IM David Brodsky, who was able to defeat two heavy favorites there despite having made a bad start to the tournament.

“Best Column of the Year” winner GM Alex Fishbein, true to his style and field of expertise, this time presents a fresh set of endgame patterns that every player should add to his fund of chess knowledge and which may avoid the necessity of carrying out difficult calculations over the board.

“Best Instructive Lesson” winner GM Jacob Aagaard, as usual offers a selection of fresh examples for chess training purposes, while “Best Tournament Report” winner GM Sarunas Sulskis continues with his recently started regular column for ACM – Magnificent 3 – this time with a focus on two games from the Candidates and one of his own recent efforts.

Our new author, GM Nikola Nestorovic starts his own ACM column in which he will be regularly presenting two unusual positions from recent tournament games that have caught his attention. This is followed by another wonderful product of Alexis Levitin’s imagination, put into words in a picturesque chess-related tale.

Jon Edwards follows with updates in the world of chess tech, NM Grayson Rorrer reviews significant tournaments played both in the U.S. and abroad, and “Best Review” winner FM Carsten Hansen reviews another ten newly published chess books. This issue closes with GM Dieter-Liviu Nisipeanu guesting in our 5x5 Q&A section, sharing his own views on how to approach chess study derived from his vast experience. 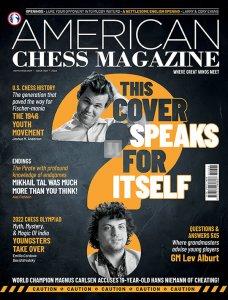 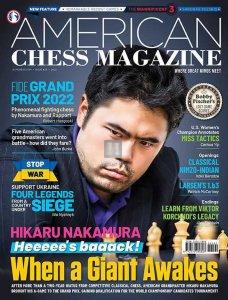